Kelly Brooks is made of stern stuff, let me tell you. As we prepared for the last gig, she didn’t let being actually technically homeless stand in her way; this time, the combination of being in the middle of exams, suffering from flu, and on the other side of the Forth from the rehearsal rooms didn’t stop her either. In the absence of a passable Road Bridge, I half expected her to swim across: fortunately she found an alternative route by means of the train, and I picked her up at North Queensferry, where the ghost of Iain Banks gave us a cheery wave.

As a band, we’re probably in a slightly odd position of not having a lot of tracks out there other than our EP, so even regular attenders at our gigs might not recognise the names on our set list. Nevertheless, here’s (in no particular order yet) what we’re rehearsing in the teeth of infrastructural failures and viral attacks for next Thursday night’s gig at the White Horse:

Needle and the Knife

Girl in the Picture

It’s a mix of older stuff, some of which we’ve not done for a couple of shows, and the new material. The cover of ‘Spit in the Rain’ came together quickly on Tuesday night. All I need to do is work out the harmonica part they didn’t put in! 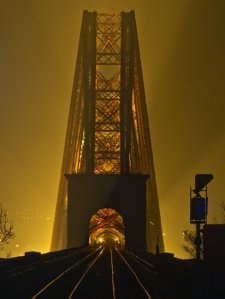